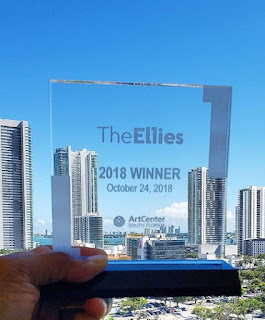 MIAMI, FL:   Miami Artist Troy Simmons was among a group of artists selected for the prestigious Ellies Award, created by ArtCenter/South Florida to recognize and elevate the careers of Miami visual artists.


The awards are named in honor of ArtCenter founder Ellie Schneiderman, who transformed several rundown Lincoln Road buildings in 1984 into artist studios. Awards were judged by a jury of independent art experts familiar with the Miami arts scene.

ArtCenter President and CEO Dennis Scholl said he was surprised by the response to the ArtCenter’s call for submissions last spring. Well over 500 individuals responded to the call.
Creator Awards of $2,500 to $25,000 were given to 38 artists to realize specific projects that include a commemoration of victims of police shootings, the transformation of concrete from a demolished housing project into monumental sculptures around Liberty City, and a documentary film on a group of gay men who arrived in the 1980 Mariel Boat Lift.

Posted by THECRAFTYREPORTER at 4:59 PM