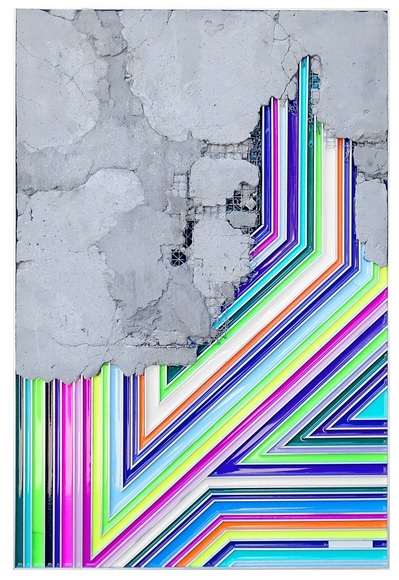 New York, NY – JanKossen Contemporary is pleased to present Dialogue, a two-person show featuring  American Troy Simmons and German artist Harald Schmitz-Schmelzer, on view from September 6, 2018 – October 8, 2018. Although visually both artists appear to be radically different, from Simmons’ bioorganic and deconstructive aesthetic in contrast to the precise geometric clean lines of Schmitz-Schmelzer, both artists carefully engineer each of their works; For Simmons, this involves building and constructing his pieces and then breaking the forms out of the concrete. Inversely, Harald Schmitz-Schmelzer’s process involves freeing the resin sculpture from the constructed molds he crates.
Troy Simmons explores the idea of the Anthropocene and humanity’s destructive relationship with the planet. He plays with the viewer’s notions of nature by depicting it as an independent entity which can fight back against man-made materials. Simmons describes his work as an exploration of incompatible binary relationships; his work exposes how these opposite forces have the ability to coexist in balance.
Inspired by nature’s persistence to co-exist despite the impact we impose, Simmons’ work is a contemporary reimagining of the Arte Povera movement, particularly in the beautification of everyday objects and the bold juxtaposition between traces of nature and industry. However, rather than presenting the objects simply as they are, Simmons creates a dynamic sculpture wherein the materials work both with and against each other.
Conversely, the creations of Harald Schmitz-Schmelzer draw inspiration from nature and ancient culture’s most elemental forms, functioning as contemporary manifestations. Through a technique evolved over years of experimentation, the pigmented resin is poured in parallel or vertical layers onto a base of raw tropical wood.

About JanKossen Contemporary
JanKossen Contemporary, founded in 2009 by Dr. Jasmin Kossenjans, is an international dealer of contemporary art representing artists working across disciplines. Its principal focus is the representation of an international group of contemporary artists whose diverse practices include painting, drawing, sculpture, video, large scale installation, and performance. Aside from its represented artists, the gallery collaborates directly on exhibitions and projects with other artists and guest curators. The gallery is committed to presenting its artists’ work in an international context and to firmly establishing their contributions to the cannon of art history. Gallery artists are in the collections of, and have been part of exhibitions at, many museums around the world. Their works have been widely published as artist monographs, in art journals, and among critical theory texts. The gallery operates in Basel, Switzerland; Venice, Italy; New York, NY; and will open a new exhibition space in Hong Kong in 2019.
For press inquiries or general information, please contact the gallery office at admin@jankossen.com or call at 631-903-5564.
Posted by THECRAFTYREPORTER at 8:04 AM 1 comment: